Seriously! Where do we even start with this album review of Aaron Watson's lyrical ingenuity? This 20 track, self-written album is fueled with inspiration and heart & soul from the self made, independent, true to Texas, country singing rockstar!

Literally, have you scene Aaron Watson on the stage? He steals the hearts of women and kids around the Nation within minutes. At a show in Humble, Texas last year, I saw him bring a kid a birthday present and give it to him, announcing it from the stage just because the kid's mother tweeted Aaron before the show! At the Texas Gator Fest in Anahuac, Texas last year, Aaron brought 5-10 kids on stage to dance and play the fiddle with his band.

How many other artists care that much about their fans? Answer: Not nearly enough! The birthday present Aaron got for that boy wasn't small either, I think it was probably the biggest nerf gun that you can buy at your local Walmart.

Ok, I got a little sidetracked. Back to the Red Bandana album review. First question, what modern day artist self writes all 20 songs on their new album? Only one that I know of so far is Mr. Aaron Watson.

Twenty Amazing, From The Heart, Self Written & Independently Published Songs by Aaron Watson

Wow. Just wow. This tune will take you to places you've never been. Aaron spins this situational melody of him (or really any songwriter) & the ghost of Guy Clark sitting on an old tailgate of a beat up pickup truck just picking a guitar (sort of a song swap scenario). Watson uses this moment to cleverly twist into the reality that when you get chances in life, give them all you've got to give. Using hooks and metaphors such as: pencil to the pad, bullet to the gun, catching lightening in a bottle, searching for solid gold and several others, Watson truly nailed it with this one! Do not skip past this one on the new record!

The perfect instrumental tune to follow Ghost of Guy Clark. This tune smoothly opens with the horse riding trumpets instrumental to fade in to the next song (which is amazing) Dark Horse.

Another highly inspirational tune showcasing the ability to accomplish anything you truly want to in life. Aaron strategically uses terminology from several of his earlier hit tunes such as: Underdog, Runaway Train (Freight Train). Over and over, Watson continues to showcase the fact that Nashville really dropped the ball not signing him! All the while, Watson continues using his life learned experiences and battles with the Nashville scene as a way to prove to his fans that they can also follow and accomplish their dreams.

Watson clearly defines and elaborates on his true love for his beautiful wife Kimberly. Reminding while he is not perfect, that she is as close to perfect as it gets.

Old Friend is a very upbeat tune. Catchy hooks describing troubles, pains and our own versions of cocaine (or bad addictions). Reminding us again that he's not perfect, Watson encourages us to stay out of trouble and live a little life sometimes. This one may have a very good chance of hitting the radio for sure. We'll make this our #4 pick for hitting mainstream country radio. Come on 93Q Country or The Bull Radio! Let's pick this one up and give it some spins!

This is our #1 pick for country radio! Kiss That Girl Goodbye, without a doubt, is a tune that will hit mainstream radio. Upbeat and catchy tune similar to the nature of Watson's 2017 Billboard hit song Outta Style. Quick melodies of playing your heart like a little violin, rhymes & riddles and westbound trains. Great job Aaron Watson!

This is a beautiful rendition carefully putting you in the exact place Aaron was in life during his childhood years. Raised up in a two parent home with parents that loved each other endlessly. Ending each night tucking Aaron in bed and then continuing to the living room where they would dance and sing together to a faded signal on country radio. Watson uses crafty hooks in this one such as: Loretta & Conway, Johnny & June. Also, reminding everyone that when you don't have much you can still cherish the things you do have.  Country Radio is a fantastic tune that should actually make it to country radio.

Hands down my absolute favorite so far! Watson was an absolute genius writing this song. Legends puts a unique spin on Aaron's heroes as songwriters, poets, singers, prominent Christian figures & performers both either living or dead. Using legends such as Elvis, Willie, Merle, Kris Kristofferson, Tom Petty, Stevie Ray Vaughn, Janis Joplin, Kurt Cobain & many others, Aaron puts a play on the fact that some of the legends may even still be alive and in hiding. Similar to the way we grew up in the 80's believing Elvis may still be alive. Watson reminds us that some are here and some are gone but legends always live on and on and on. Just another blast of motivation from Aaron reiterating that kids these days need to dig deeper to find their souls. Also, taking another quick jab at Nashville reminding everyone that just like his heroes, he too, is free as the wind, following his dreams.

This was a bold move for Aaron. Starting out the tune to the subtle similar steel guitar beat of The Chair by George Straight, Watson uses his wit to hook the word Amarillo into the title & chorus which I don't think was an accident. Has anyone ever used the word Amarillo in a song other than King George? Watson softly drops Texas city names such as San Antonio, Amarillo & Plainview into the verses. This will be a Texas favorite for sure!

What's your favorite tune so far? Drop us a comment below.

Casting another clear picture deep into your mind, Watson recalls a friendship growing up that was more solid than most. Who else remembers cutting yourself and becoming blood brothers with your best friend growing up? I do! Taking a slight political approach, Watson highlights the fact that him and his best friend had different shades of skin but that never got in the way. Making a clear statement that they we're more than black and white and pointing out the fact that everyone should act like blood brothers no matter their race or ethnicity.

Another blast of true spirited motivation from Watson! Aaron opens up with another slight stab to Nashville with verses such as "Defying odds, I'm defying gravity" & "They said I couldn't fly, therefore I flew". You can feel the confidence of this entire album that Aaron has brewing inside of him in this one song. Again, reminding all his fans to work hard for what you want to accomplish in life.

A classic depiction of learning Watson’s cowboy ways from a man named Red. Watson reminds us of his faith in God while explaining that Red taught him how to rope & pray.

The title track! Aaron tells the story of how he still wears Red's old faded Red Bandana. Painting the picture of wiping the sweat of his eye brows. Red must have made a huge impression on Aaron's life growing up. Watson hooks in a few other common phrases from his other great songs like "barbed wire". This is an awesome tribute song to the man known as Red. 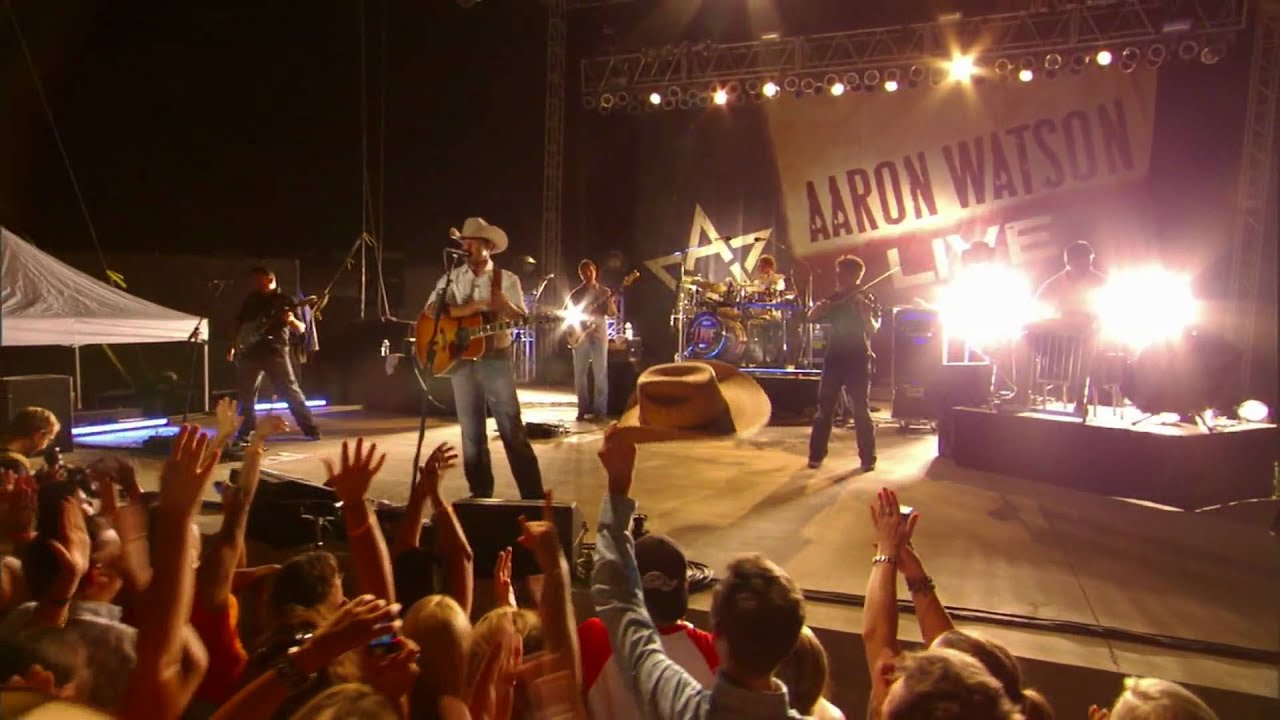 This tune starts out with the soft sounds of a train horn and crossing bars coming down as Watson begins a quick strum. Referencing back to his red bandana and blue jeans, Aaron describes again how we aren't perfect people but we can keep trying. With a hint of a banjo in the background, Aaron masterfully drops the all famous three words Walk The Line into this tune. You will love the melodies of tight rope walking on a windy day and there's heaven in her eyes and hell to pay. Once again, Watson reassures his faith in Christ by asking God to feed him the crumbs that falls upon His floor.

A slower finger picking song that displays the low cracking and believability in Aaron's voice. Similar to the way he sounds in Barbed Wire Halo or Next To Heaven. Once again, Watson describes his never ending love for Kimberly and/or his children. Explaining the security of feeling at home, this is a terrific song in ever essence.

This is pick #2 for us that we think will definitely get some well deserved spins on country radio! Using the quick, catchy verses similar to Outta Style & Kiss That Girl Goodbye, Watson keeps you entertained and energized every step of the way.

Upbeat, up tempo tune that was written for the radio for sure! This is our #3 pick that will land on mainstream radio. Dropping catch phrases like Dirty Dancing, juke boxes and bee bop a loop bop (a wap bam boo). It's almost like Aaron wrote this song knowing it would be a huge hit with every single stroke of the pen.

Aaron slows it down again with that cool cowboy swaggered approach on this one. Flowing into soft slow kisses and curves of a woman, Watson says 'girl don't make any plans, I've got nothing buy you on my hands". Well played Aaron! He may win ladies man of the year for this one!

Watson slows it down another step during this master crafted melody. Metaphorically challenging people wanting to be stars vs. moons, Watson makes his case why moons are just as good as stars. Great job Aaron!

An artist with a cause! That's exactly what Aaron Watson is! 58 is a 58 second song paying tribute to the 58 men and women who lost their lives at the 2017 mass shooting in Las Vegas. What other artist in country music has done this? Aaron expresses his condolences with nationally syndicated radio host Glenn Beck. View this interview with Aaron Watson on the Glenn Beck Show.

Hats off to you Aaron Watson! Thank you for continuing to be true to who you are, doing your best to save country music, continuing your pursuit of The Gospel through your lyrics, encouraging good family based homes for children and inspiring us all to be better than who we were yesterday. May God Bless you, your family and your music!

In summary, Aaron Watson's new album is 100% worth the listen! Our prediction is that at least 4 songs from this album will hit on mainstream country radio and at least 2 of those should chart the billboards. Thank you for visiting our blog and we'd appreciate a share or a like on social media! Visit our Facebook page here - Austin Music USA.